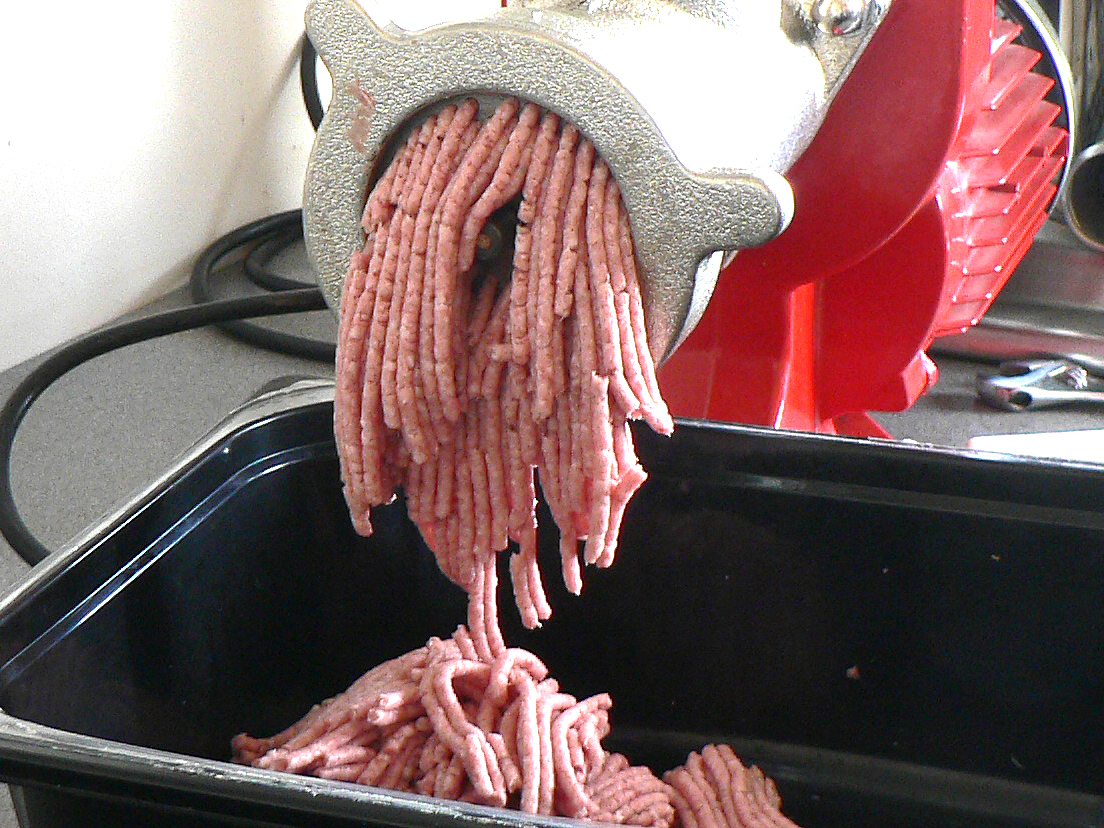 The suppliers listed were selling these items at the date of writing. The items they stock may change over time, so it’s always worth checking to see if they’ve extended the range of goods offered.

A certain amount of equipment is needed to make sausage and to cure safely. I’ve listed a few suppliers here. Listing by me does not mean that I recommend any particular product or business listed.

Mincers
These can be either hand or electric mincers. Many people already own a food-mixer with a mincing attachment, such as a Kenwood Chef or Kitchen Aid, these are fine for small scale sausage making.

Stand-alone mincers/grinders are available from a number of suppliers. At the budget end of the market, there are many available from the major electrical goods suppliers and from online sources. For quality machines, Weschenfender’s sells a variety of sizes.

Stuffers
You can stuff sausage skins (casings) by hand with a funnel, but It’s hard work. It’s better to use either an adapter for your mincer or a special sausage stuffer.

Attachments for standard-sized mincers are available and are often included when buying. If not they are available, either from ebay, or from Kitchenaid and Kenwood for their machines. They come complete with the mincer for newer models. Personally, I find it hard to use the sausage stuffers on mincers, on the other hand, I know people who use nothing else, so the choice is yours – this is certainly the cheaper option.

I use a dedicated sausage stuffer, these are available from suppliers such as  Weschenfender’s and Butcher’s Sundries.

Scales
Accurate scales are useful for measuring small quantities of spices/herbs. I would recommend that you buy some as they allow you to repeat recipes easily. Scales, accurate to a tenth of a gram, or even one hundredth, are available quite cheaply online. There’s usually some on ebay or a quick ‘Google’ for ‘pocket digital scales’, will show many other suppliers.

Sausage Skins (Casings)
These are usually sold by the hank (about 100 yards), or half-hank, and are preserved in salt. They can be bought ‘pre-spooled’ – that is to say they come on rods ready for soaking and threading onto your sausage stuffer rather than in a big bundle. Casings can be natural or artificial. Natural hogs’ (pigs’) and sheeps’ casings are used for fresh sausages and need soaking in water before use. Ask the supplier for details of the preparation required for their casings. Artificial casings generally don’t need soaking.

Weschenfelder’s are specialists in the preparation of casings producing thousands of miles of casings each year. Other online suppliers include Butchers Sundries and sausage- casings.co.uk. Larger quantities are available from Scobies and Weschenfelder’s.

Cures #1 and #2 are sold by Weschenfelder.

All in one cures

There are a large number of ready-made cures available for specific types of products and also for general curing. These are available from Weschenfelder’s. Larger amounts of these cures can be purchased from Scobies.

Sodium ascorbate
This is a vitamin C salt that is used in small quantities as a cure accelerator. It also adds to the safety of cured meats that will be fried at high temperatures. It can also often be bought on ebay.

Lactic Bacteria Culture
This is used to make air-dried sausage safe. ColdSmoking are now selling Hansen’s sausage cultures and Weschenfelder’s stock a few. They require storage in a freezer.

Mould Culture
Used to make promote the development of good moulds on salami. The culture, Penicillium Nalgiovense, is only available in the UK in industrial quantities the same suppliers as Cultures. Many home curers in the UK cultivate their own from a commercial salami.

Meat Injector
Specialist meat injectors are available from Weschenfender’s. In view of the the cost of these, many home curers use a Marinade Injector instead, They can be bought from ProQ. However, the best one I’ve used so far is the Masterclass Flavour Injector which is available from the Amazon Website.

Temperature Control
Digital Thermostats can be used to adapt a fridge into an air drying chamber. They are available from a number of suppliers on ebay.

Humidity Control
Digital Hygrostats are also available from a number of suppliers on ebay..

Smokers
There are a number of suppliers of smokers in the UK, two of the most popular are:

Smoking Woods – Buying bulk supplies of smoking woods can save a lot of money. Ashwood Smoking Chips in Kettering sell a good range. However, check that the wood you buy is suitable for use in the ProQ CSG.