Whilst I hope to show that curing and drying meat needn’t be expensive, this project does require somewhere that the meat can be hung at around 10 – 12°C in a relative humidity around 75 – 80% in a food-safe environment. A fridge adapted for this purpose will soon pay for itself. The piece of meat I used was one of the cut-price ones I got from a local supermarket with the intention of showing that curing meat needn’t be expensive. It weighed 1070gm – I’d have liked it to be larger but we’ll see how it goes.

For each 1 kg of pork loin, or pro-rata:

You simply rub the cure on the meat and then put it into a food-grade plastic bag and wrap it tightly, or wrap it in cling film and then put it into a bag, or vacuum pack it. It’s put into a normal fridge while it cures. I’d normally post a picture of this but having taken the pictures I realised that the nice banner on the screen wasn’t telling me how successful I’d been but that there wasn’t a memory card in the camera. Oops!

I cured it for 20 days as I was in no hurry and because it gives plenty of time for the nitrate in the cure to react with the bacteria in the meat.

Once cured, it was rinsed and was to be neatly tied inside a fibrous casing for the drying period – just like this lomo. Unfortunately, all the casings that I have were either far too small or far too large; I ended up resorting to cutting a casing up and using it to wrap the meat like a parcel. I would normally sew the casing before tying it in these circumstances but laziness got the better of me and I just tied it.
I made a right bish of it! Firstly, when I bought the last lot of butchers’ twine I pushed the boat out and bought really thick twine; it’s bloomin’ awful stuff! You only have to look at it and the strands become untwisted. It doesn’t tighten as easily when tying the meat inside a casing either. I ended up with a bit of a botch-up! 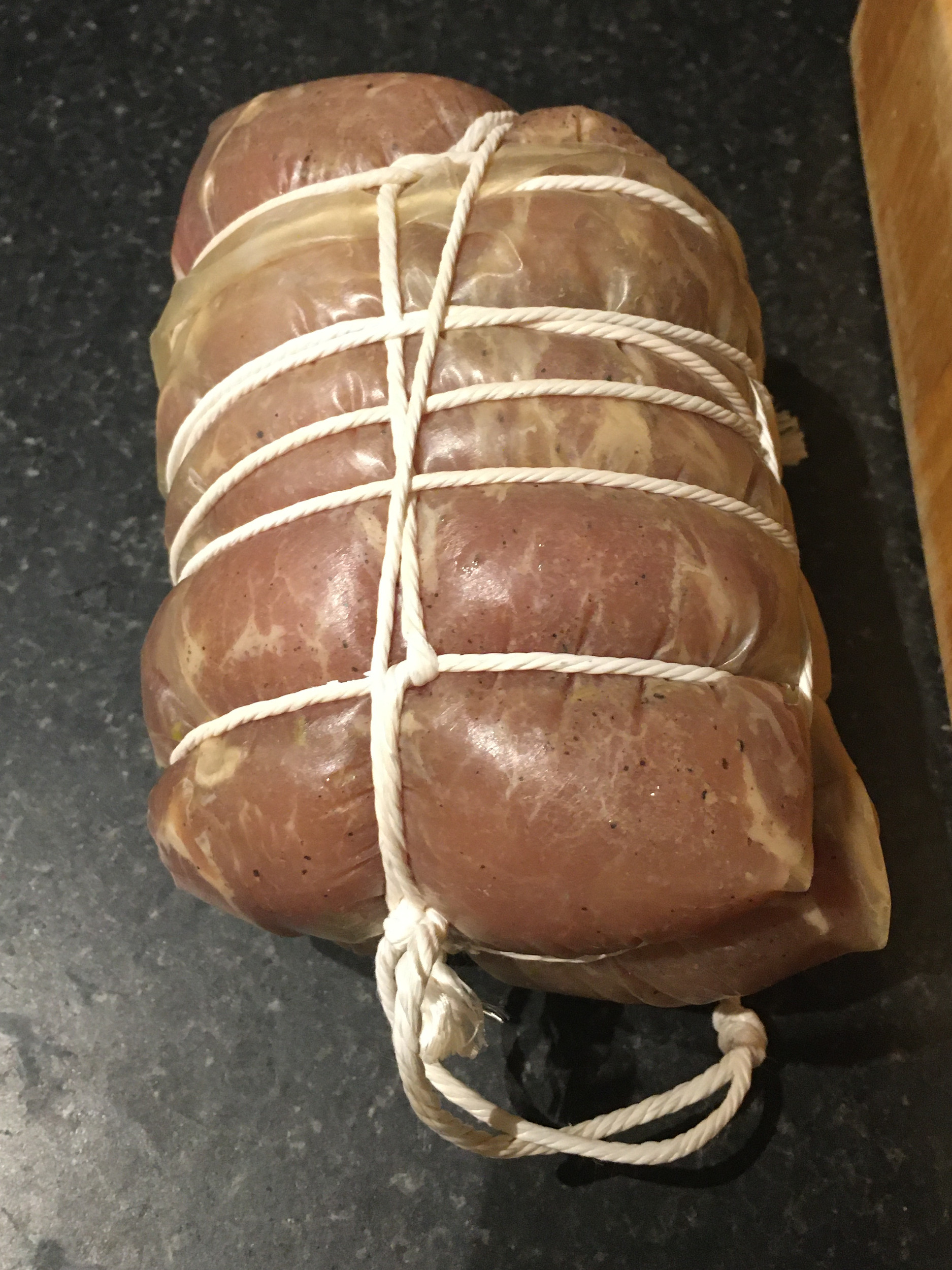 It’s hanging in my drying fridge at around 10°C with a relative humidity of around 80%. It’ll stay there until it’s lost about 35 – 40% of its weight.

I can already see that where the string cuts into the meat at either end the slices of meat will not look very nice. I will buy some different sizes of casings for future projects to avoid the inevitable losses that will occur, due to the string dents, when this is sliced.

The loin is drying slowly in the adapted fridge and the humidity has been reduced gradually over the last couple of weeks to 75% RH. I may have reduced it further if it wasn’t for other projects in the chamber that still need a higher RH. My preference is for a slow weight loss, so I’m happy with this progress.

You’ll notice that on the 17th November it had gained weight. This is due to the introduction of 10 long snack sticks into the chamber just prior to this; it’s one of those things you have to accept when using one small chamber for multiple projects.