END_OF_DOCUMENT_TOKEN_TO_BE_REPLACED

It’s not been a very productive week, however, I managed to start off a Lonzino Stagionata. I think this is the correct term for what is a cured air-dried loin of pork, Italian style.

It’s basically like a parma ham but from the eye of the loin. Expensive, but superb.

I started off with 4½ kg of pork loin from Joseph Morris’s. It was boned and the eye of the loin removed yielding 1½ kg of meat for the Lonzino and a further 2¼ kg of meat/fat that will be used in chorizo.

Now for the cure, what should I use? I am at something of a disadvantage here as I’ve never tasted Lonzino. Online recipes, of which I found only two from trusted sources, varied considerably in the spices used so I was left with making up my own interpretation from the (little) information available – it’s turned out as a sort of combination of the two online recipes. Whether it will be anything like the original is anyone’s guess! Anyway, here it is:

Grind the spices and mix with the other ingredients. Rub cure into the loin then put it into a food grade bag or vacuum pack it.

The Lonzino was cured for 12 days. I washed and dried it and put it into a 90mm collagen casing. The casing was tied (badly!) and pricked to aid drying.

The black wires in front of the Lonzino are from the humidity and temperature sensors in the fridge.

In late August I sliced some of it Getting to that stage was not been without its problems what with a new fridge set up for the drying it’s been a case of juggling things about to get the humidity at the correct levels – not helped by the weather we had at the time.

It’s a little dry around the edges, surprising as if anything the humidity was a little high in the early stages of drying. I dried it to a 36% weight loss. Next time I’ll dry it less and test for water activity to make sure it’s safe. I don’t think the drying was helped by the small size of the loin or the fact that I de-cased it after about 20 days as some undesirable moulds were starting to form under the casing – I obviously hadn’t got it tight enough around the meat. The mould? I brushed that off, rubbed the area with wine vinegar to kill any remaining nasties, and sprayed the meat with Penicillium Candidium – the white mould that is seen on Brie and Camembert cheeses. Within a few days a nice coating of white had appeared:

Pauline really likes its fennel overtones; I’m not as keen. Yes I like it, but think I will do a Lomo next time – basically, Lomo’s the same thing but with paprika flavours – Spanish as against Italian. That said it’ll make a nice addition to the growing charcuterie store. 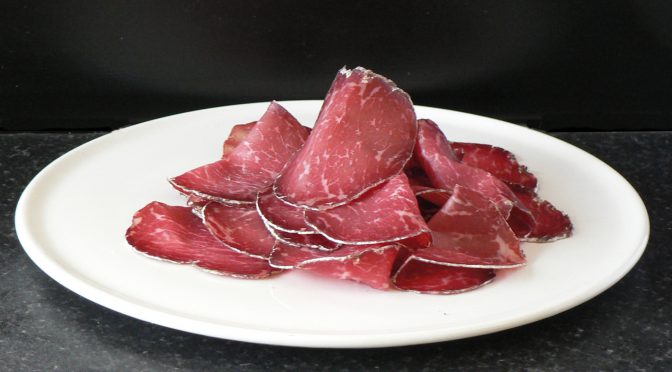 END_OF_DOCUMENT_TOKEN_TO_BE_REPLACED

This Lomo is made from the solid muscle that forms the eye of a pork loin. It starts by cutting the ‘eye’ from a loin of pork:

It was dry-cured in a vacuum bag with Spanish smoked paprika, black pepper and garlic for a couple of weeks:

END_OF_DOCUMENT_TOKEN_TO_BE_REPLACED

This is a rolled pancetta – pancetta arrotolata – from a recipe by my mate Larbo who now lives in the US.

It’s unusual as it’s flavoured with orange zest and fennel – not the traditional flavours you expect in pancetta.

The meat was dry-cured for 12 days, rolled and tied, and has been hanging in my air-drying fridge for 27 days.

Allowing for the removal of the skin when it was rolled, it’s lost 22% of its original weight – in supermarket terms it’s been made with 127gms of meat per 100gms pancetta.

END_OF_DOCUMENT_TOKEN_TO_BE_REPLACED

This Pancetta cuts right back on the spices letting the meat shine through.

If you make it, try to get a very thick piece of belly pork from the butcher; the one I used wasn’t really thick enough because the shrinkage is quite considerable. It looks thicker in the photo than it actually is. What looks like green/black mould is actually beneficial white mould on top of the powdered black pepper that I used because I was too lazy to grind the coarse black pepper that I included in the recipe!

END_OF_DOCUMENT_TOKEN_TO_BE_REPLACED

Many local farm suppliers are only too happy to sell you half a pig, usually rare breed; Gloucester Old Spot and the like. They generally weigh around 55-60lbs for the whole side before boning and making it into whatever pieces you require.

For curing, I wanted a side from a much larger pig, a ‘baconer’; a side of this will weigh between 80-100lbs. I got one from Don Hutton at Warwick Bridge Farm, Littlethorpe weighing 93lbs which has given me 75lbs of usable meat (60lbs excluding hocks, trotters, liver, heart and cheek). By the time it’s converted into ham, bacon, sausage, faggots etc I’ll have about 70lbs of edible products. This photo of a piece of loin being dry-cured for back bacon shows the size of it.

I’ve made all the usual things like bacon, ham and sausage and decided that my first venture into air drying meat would be pancetta. This Italian streaky bacon is made by dry curing bacon with a load of spices added to the cure, and then hanging it up to dry for a month or so – apart from the spices, that’s how we made bacon a few years ago!

END_OF_DOCUMENT_TOKEN_TO_BE_REPLACED

The Gascon salted pork called Ventrèche is bacon that at its most traditional seems to be cured with just salt as a curing agent. However, commercially produced varieties seem to contain nitrite curing salts. This Cookery School article infers that it’s a fresh product used after a day’s salting – however, this by an attendee at the same school explains:

“After salting the belly and adding pepper to taste, we tie it up… …then suspend the roll to smoke it in the giant kitchen hearth overnight before hanging it in Camont’s ancient pantry for use throughout the season”.

That goes some way to show that it is a cured product (albeit that this one’s without nitrite). Of course, it introduces smoking into the equation just to confuse the issue. Other sources refer to it as an unsmoked product and use nitrite or nitrated curing salts; what all varieties have in common is a noticeable swirl of black pepper between the rolled layers of meat, although it can also be sold ‘flat’. It would appear that it can also contain garlic.