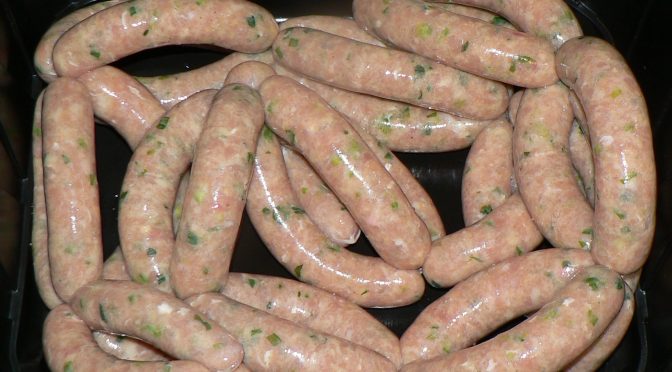 I’ve been looking for a good recipe for chicken sausage and back in October, I made one that was devised by a friend and was flavoured with thyme, lemon and garlic having been inspired by Chef Thomas Keller’s famous recipe for chicken brine. I was so confident that it would be great that I even posted a ‘coming soon’ photo. After all, what’s not to like? They’re a classic combination. Well, somewhat embarrassingly, the family didn’t like it. I’m sure others will though and the recipe’s here for people who want to try it… …and I encourage you to do so.

END_OF_DOCUMENT_TOKEN_TO_BE_REPLACED

I don’t write much about fresh sausage, mainly because we generally stick to the two recipes I’ve already put online, my Thurlaston sausage and Lincolnshire sausage. However, I thought I’d do something different for a change and chose to make Pork and Apple sausages. Now I’ve tried these before and wasn’t happy with the results so I trawled the web to see what I could plagiarise off other people! The results received rave reviews from the family, so here’s my recipe with thanks to Welsh Wizard and Parson Snows from the sausagemaking.org forum on whose recipes’ it’s loosely based:

Chop Rosemary then mix together well. I mixed them in a coffee grinder.

For 1kg of meat

Start with about 400ml of good quality apple juice. Boil it in a pan until it is reduced by half and leave to cool. Then soak the dried apples in it for about 1 hour before chopping them.

Having kept the pork in a very cold fridge, mince it. I minced it through a plate with 6mm holes and then through one with 4.5mm holes. Add the rusk, seasoning and chopped apple and then pour 110gm (110ml roughly) of the remaining apple juice over. Either mix by hand until you think you’re going to get frostbite or use a Kenwood type food mixer (not food processor) to mix it for 3 or 4 minutes until the the mixture is sticky sausage meat. That is, it changes from just a burger-type mix into a sticky mass; the smell seems to change too. It’s hard to describe but you need to do this to develop the myosin in the meat that will stop the sausage from becoming dry and crumbly when you cook it. You may need to add a little more apple juice to get a good mix. Don’t add more than an extra 20ml – 25ml though, otherwise, the sausage will spit like a camel when you fry it!

Stuff the sausage into pre-soaked casings (follow the supplier’s advice for soaking the casings), then hang them to ‘bloom’ (develop flavour) in the fridge for 6 – 8 hours. Some fridges are very dry so check the sausages regularly and if they appear to be drying out too quickly put them on a tray and cover them for the rest of the ‘blooming’ period.

You could use cider instead of apple juice in this recipe. Preferably a local one.

The only disappointing thing about these sausages is that I had to buy foreign dried apples; it looks like I’m going to have to dry some myself when they’re next in season 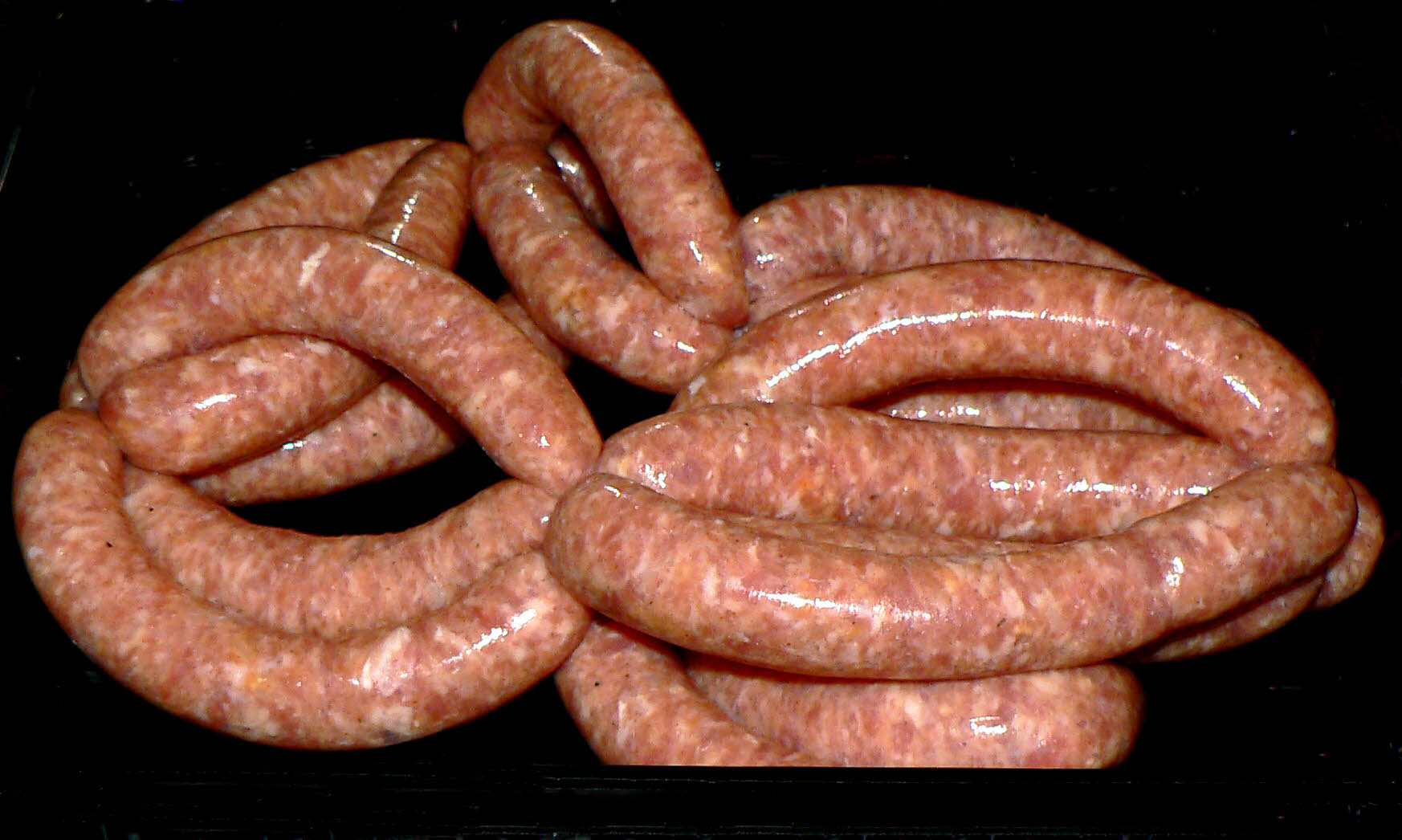 END_OF_DOCUMENT_TOKEN_TO_BE_REPLACED

This sausage formulation was posted on the sausagemaking.org forum. It has had a slight alteration by me. It was developed from a recipe that was originally supplied by the butcher Phil Groth to forum member Parson Snows with some adaption by another forum member, Oddley.

END_OF_DOCUMENT_TOKEN_TO_BE_REPLACED

This is the everyday Pork Sausage that I make for Pauline. She prefers thin sausage in sheep’s casings. Sheep’s casings are harder to use than hogs as they split more easily but the extra care needed is worth it as the delicate casings make for great eating.

END_OF_DOCUMENT_TOKEN_TO_BE_REPLACED

This sausage is an amended version of the Every Day Pork Sausage that I posted a while ago. The first version is a nice peppery sausage that we all like a lot. The family, however, thinks this one is even better. Less peppery and with a more rounded flavour.