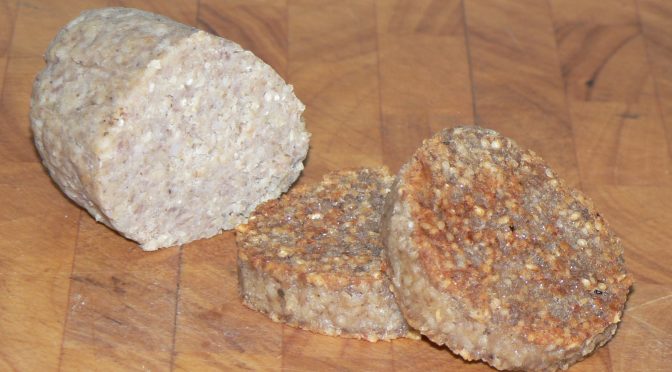 Some time back I posted about my trials of an Irish White Pudding recipe that I developed in collaboration with my forum mate John.

Now, I have to admit, I can take or leave these Irish delicacies but I believe that this recipe is as close to the commercial ones, as we can get. That is, the ones that I was sent which are made by Breeo Foods of Dublin and sold under the ‘Shaws’ brand name. They’re the ones on the left in this picture:

The final recipe stood up to the ‘John’s mother-in-law’ test and passed with flying colours.

Only 18gm of this mix is used in the sausage above.

Soak the oatmeal in the water for 1 hour or so. Grind the meat and onion through the fine plate of a mincer, I used a 5mm plate. Then add all the other ingredients and mix well. The sausage meat will be on the stiff side. Stuff into large pigs’ casings and poach them at 75°C – 80°C for 1 minute per mm of the width of the sausage. The final internal temperature of the sausage should be 72°C. Hold at this temperature for 2 minutes then cool in ice-cold water. To eat, slice crossways into 5 – 10mm slices and fry until brown.

For other amounts, it’s easier if you use the Ingredient Calculator below: