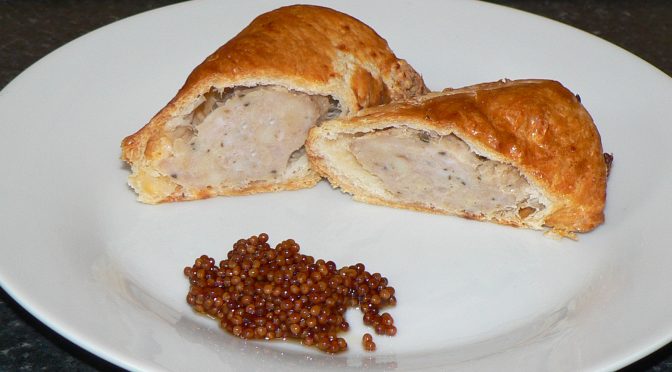 Having made the sausagemeat for rolls it’s a fairly simple task to make it into sausage rolls.

I’ve dropped a clanger by not taking a photo of the sheet of pastry after it’s rolled out but I roll it to approx 250mm (10″) by 400mm (16 “). Square the edge off that’s nearest you. I will make 2 long rolls from this that I’ll then divide each into 4 individual sausage rolls.

For approximately 100gm rolls use 170gm of sausage meat and roll pieces to form a long sausage to lay along the nearest edge. Then, lifting the pastry, roll it to just encase the meat. At this stage dampen the next inch or so of pastry with water (I think that water is better than egg wash for this) and roll the meat/pastry roll onto this. The roll can be cut away from the sheet at this stage.

END_OF_DOCUMENT_TOKEN_TO_BE_REPLACED

Mum and Dad celebrated their Diamond (60th) Wedding Anniversary in 2014. As well as sending them to a local restaurant for a meal, we decided to have an afternoon tea.

For me, afternoon tea is lots of small patisserie and cake items; oh, and some token sandwiches beforehand. I’m not one for scones and cream as part of ‘afternoon tea’; they’re for other occasions when they can be enjoyed on their own. Now, we’re not ‘The Savoy’, or even ‘The Great British Bake Off’, so I choose just a small selection of simple things: individual lemon meringue pies, fruit tarts, and meringues, along with cupcakes made by my daughter Hannah. The meringue uses up the egg whites left after the yolks have been used for the pastry and lemon meringue filling. Savouries were cucumber, egg, ham, and cheese sandwiches, some even had the crusts cut off!

‘Ere, how come when it’s lemon meringue it’s a pie, but when it’s fruit, it’s a tart?

Never mind, what I do know is that with pies or tarts, it’s all about the pastry – it needs to be strong enough not to fall apart but melt-in-the-mouth when you eat it. My method may not be the proper way but it works and results in a pastry case that’s more like shortbread than pastry.

END_OF_DOCUMENT_TOKEN_TO_BE_REPLACED

I always intend to prepare for Christmas in plenty of time, but it never seems to happen! One thing I do like to make is my own sausage rolls. There is no comparison between a homemade sausage roll, made with good (home-made) sausage meat and the awful frozen sludge-filled offerings at the supermarket. Uncooked commercially produced sausage rolls only need to have a 6% meat content!

For sausage rolls I make a quick rough puff pastry:

Spread the top two-thirds of the rectangle with one portion of both the butter and lard – just like buttering bread.

Fold the un-buttered bottom third up.

And then the top third down.

Roll the dough back out to the size it was originally and repeat the above twice with the other two portions of lard and butter. Then, repeat it one more time without adding any fat. You’ll end up with something like this:

I’m freezing this for later use as I need to make some more sausage meat. Had I have been organised, I would have had the fresh sausage meat ready so I could have frozen the completed sausage rolls ready for cooking.

There you go, I’m being posh and calling it quiche! It’s really a good old bacon and cheese flan. It’s a pity that so many poor imitations of this superb rich savoury egg custard are sold by supermarkets and presented to the world on numerous buffets with cheap frozen sausage rolls and those damn miniature scotch eggs.

A good quiche is all about the quality of the ingredients, there’s few of them, so they all count. Use good dry-cured bacon (mild smoked if you like), good eggs, double cream not milk, and you won’t go far wrong. One other thing, and a very important one, is that most recipes (including Delia) will tell you to cook the quiche at too high a temperature. I’ve said this before, but I’ll say it again – cook the quiche at around 160°C or below; you’re making a savoury custard, not an omelette!

I was fortunate to receive Jane Grigson’s book “Charcuterie and French Pork Cookery”, for my birthday a week or so ago. You see, it’s not just me:

Bake in a moderate oven for about 40 minutes. Remember that a quiche is a savoury custard tart; it mustn’t cook too quickly or it will curdle.

I feel a bit of a fraud giving a recipe; it’s not rocket science, but here’s my take on it:

Rub the fat into the flour/salt until it resembles breadcrumbs, then add water a little at a time and mix until it forms a dough. In all honesty, I generally make a batch using 1lb flour, 8oz fat and 1 teaspoon of salt, in the food processor. Don’t add too much liquid or the pastry will be hard – about 1½ – 2 tablespoons (ish) should be about right for 6oz flour.

Use the pastry to line a loose-bottomed flan tin (approx. 7½ inch diameter) then prick the base with a fork, line it with parchment paper, fill with baking beans, or rice or dried beans, and bake it at 180°C for 15 minutes. Remove the beans and parchment and bake it for a further 5 minutes. Reduce the oven temperature to 160°C ready for the next stage.

While the pastry is cooking, remove the rind from the bacon and discard it. Cut the bacon into small pieces and fry it, then put it on a paper towel to drain and cool. Mix the eggs and cream and season. Sprinkle the bacon over the base of the pastry followed by the cheese and then fill with the egg/cream mix. I do this while the pastry case is still on the oven shelf to avoid spillage. Bake it at 160°C for 40 minutes or so until it’s set.

It can be eaten warm but according to my wife is better eaten at room temperature the following day.